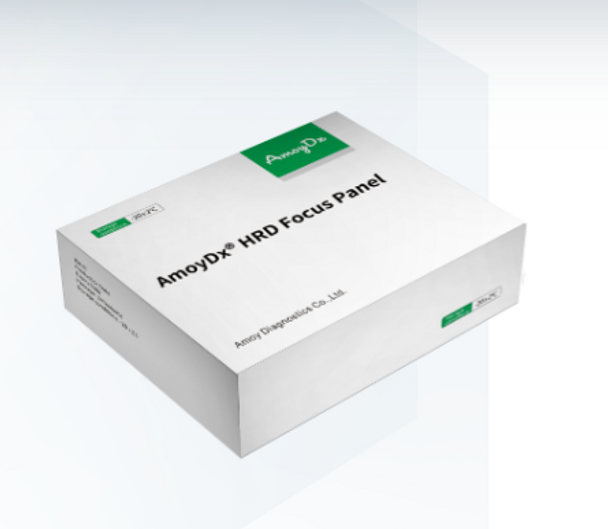 Background
The Homologous Recombination Repair (HRR) pathway plays an important role in the repair of double-strand breaks, which is a major cause of cancer development. It has been demonstrated that loss of function of HRR genes, Homologous Recombination Deficiency (HRD) is the inability to repair double strand breaks and will cause a higher risk of developing cancer[1-5]. Patients with HRD showed higher responses to poly ADP ribose polymerase inhibitors (PARPi) and platinum-containing therapies[6-7]. HRD Score testing and BRCA1/2 mutations testing have been approved for patient selection for PARPi therapy.

The AmoyDx® HRD Focus Panel is a next-generation sequencing (NGS) based in vitro diagnostic assay intended for qualitative determination of homologous recombination deficiency (HRD) status via detection and classification of single nucleotide variants (SNVs) and insertions and deletions (InDels) in protein coding regions and intron/exon boundaries of the BRCA1 and BRCA2 genes and the determination of the Genomic Scare Score (GSS) which is an algorithmic measurement of genomic instability status, using DNA isolated from formalin-fixed paraffin embedded (FFPE) tumour tissue specimens. The assay is intended to aid in identifying ovarian cancer patients with positive HRD status.

This assay is not automated and is for laboratory professional use only.

Principles of the Procedure

The test kit is based on the Halo-shape ANnealing and Defer-Ligation Enrichment (HANDLE) system technology which is an improved Molecular Inversion Probe (MIP) technology to capture the target gene region (Figure 1). The unique molecular identifier (UID) is introduced to both ends of each DNA fragment to trace back to original template for error correction. The library construction time of HANDLE system is 5 hours with 1 hour hands-on time. After quality control (QC), the prepared DNA libraries are sequenced on Illumina sequencing platforms to detect the BRCA1/2 gene mutations and HRD status. 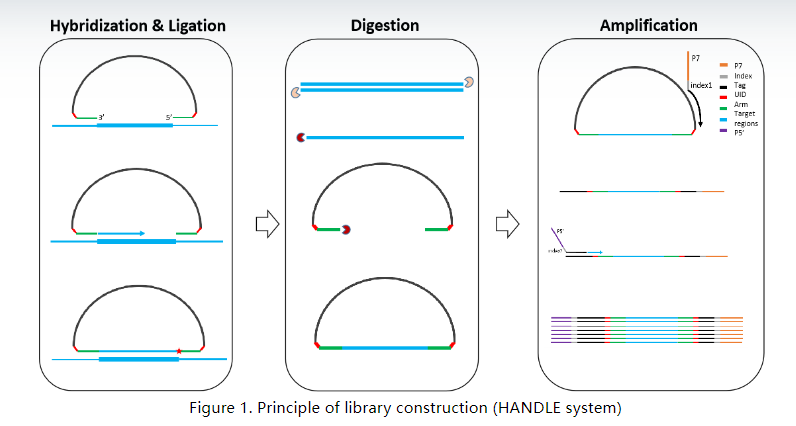