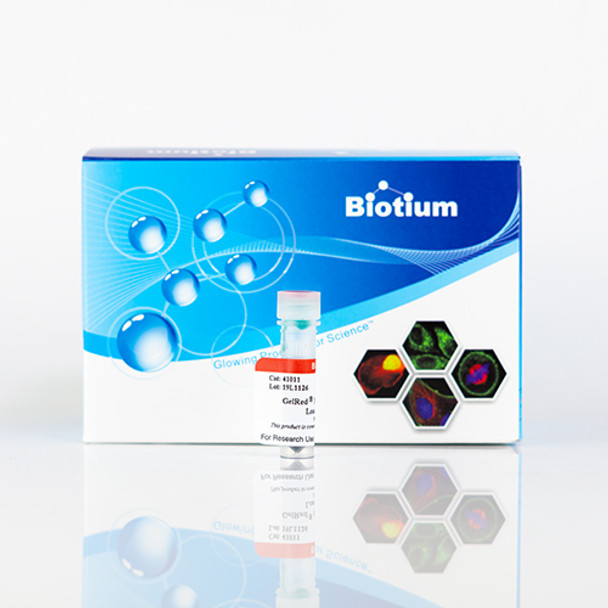 GelRed® Prestain Plus 6X DNA Loading Dye contains density agents, tracking dyes, and GelRed® dye. The 6X prestain loading dye is added to samples in place of gel loading buffer, and eliminates the need to add fluorescent DNA dye to the agarose gel during casting or after electrophoresis. The loading dye contains two blue electrophoresis tracking dyes that run at approximately 1.5 kb and 200 bp in a 1% agarose gel.

This product is an improved version of our original 6X GelRed® Prestain Loading Buffer (catalog number 41009) with brighter signal and more consistent DNA migration. When DNA is bound to GelRed® before electrophoresis, the ratio of dye to DNA can cause variable shifts in DNA migration, making it difficult to compare DNA fragment sizes between samples. GelRed® Prestain Plus 6X DNA Loading Dye is formulated to minimize this DNA migration shift, for greater consistency. GelRed® prestaining is simple and can avoid migration issues seen with GelRed® precast gels.

A Superior & Safer Alternative to EtBr

GelRed® is a sensitive, stable and environmentally safe fluorescent nucleic acid dye designed to replace the highly toxic ethidium bromide (EtBr). GelRed® and EtBr have virtually the same spectra, so you can directly replace EtBr with GelRed® without changing your existing imaging system. In addition, GelRed® is far more sensitive than EtBr, which cannot be used in DNA loading buffer to prestain DNA. GelRed® is compatible with downstream applications such as sequencing and cloning. It is efficiently removed from DNA by gel extraction kits or by phenol/chloroform extraction and ethanol precipitation.

GelRed® was subjected to a series of tests at Biotium and by three independent testing services to assess the dye’s safety for routine handling and disposal. Test results confirm that the dye is impenetrable to both latex gloves and cell membranes. The dye is noncytotoxic, nonmutagenic, and classified as non-hazardous for disposal under CCR Title 22 Hazardous Waste Characterization. See the GelRed® and GelGreen® Safety Report. To learn more, see our GelRed® Technology Page and GelRed® FAQs.

How Safe is Your Gel Stain?

Many so-called “safe” DNA dyes like SYBR® Safe, Midori Green, GreenSafe, SafeView™, and RedSafe™ not only have low sensitivity, but also readily penetrate living cells to bind DNA, and some are cytotoxic. Unlike these dyes, GelRed® is cell membrane-impermeant, so it cannot enter living cells to interact with their DNA. See our Gel Stains Comparison Flyer or  Gel Stains Comparison White Paper for details.

Choose the Right Stain for Your Application