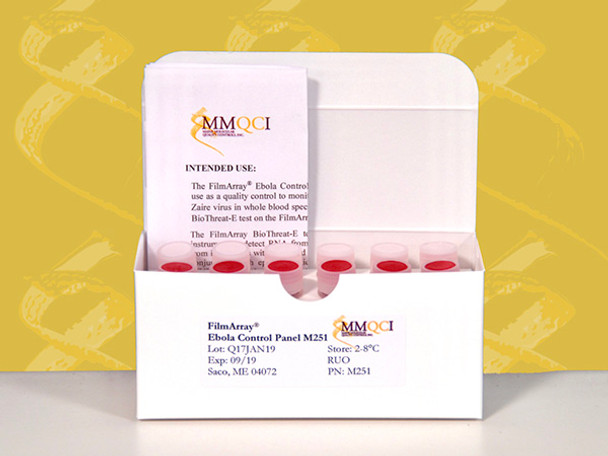 The FilmArray® Ebola Control Panel M251 is intended for in vitro use as a quality control to monitor the presumptive detection of Ebola Zaire virus in whole blood specimens when tested by the FilmArray® BioThreat-E test on the FilmArray® instrument.

The FilmArray BioThreat-E test is performed on the FilmArray instrument to detect RNA from the Ebola Zaire virus in specimens from individuals with signs and symptoms of Ebola virus infection in conjunction with epidemiological risk factors. Ebola virus disease (EVD), formerly known as the Ebola Hemorrhagic Fever (EHF), is a disease in humans caused by four of five viruses in the genus Ebolavirus, from the family Filoviridae. The four viruses are Bundibugyo virus (BDBV), Sudan virus (SUDV), Taï Forest virus (TAFV), and Ebola virus (EBOV, also known as Zaire Ebola virus). The Ebola Zaire virus is the most dangerous of the known EVD- causing viruses and is responsible for the 2014 West Africa Ebola virus outbreak, with the largest number of deaths to date1. As of October 25, 2014, the World Health Organization has reported there are 10,141 confirmed, suspected, and probable cases of EVD in six affected countries (Guinea, Liberia, Mali, Sierra Leone, Spain, and the United States of America) with 4,922 reported deaths.2

FilmArray® Ebola Control Panel M251 is comprised of synthetic DNA suspended in a non-infectious solution of buffers, preservatives and stabilizers.

Best practice is to establish a quality control program for every assay performed by the laboratory.3, 4 Routine use of quality controls that are consistent lot to lot assists the laboratory in identifying shifts, trends, and increased frequency of random errors caused by variations in the test system, such as failing reagents. Early investigation can prevent failed assay runs.

The FilmArray® Ebola Control Panel M251 is comprised of 12 single use tubes, 200µL each, of synthetic DNA suspended in a non- infectious solution of buffers, preservatives and stabilizers. There are

The laboratory should follow Good Laboratory Practice (GLP) and establish its own performance characteristics for FilmArray® Ebola Control Panel M251 in demonstrating adequate system performance. Recoveries may vary depending on instrumentation, reagents and systematic or random errors. The expected results when the controls are analyzed are listed in Table 1.