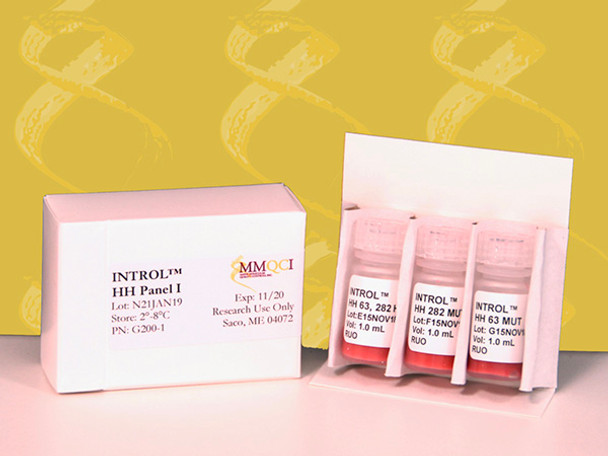 INTROL™ HH Panel I is intended for in vitro use as a quality control to monitor analytical performance of the extraction, amplification and detection steps of test systems used in the qualitative measurement of H63D and C282Y, the mutations most commonly associated with hereditary hemochromatosis. Hereditary hemochromatosis is an autosomal recessive iron- storage disorder characterized by inappropriately high absorption of iron by the gastrointestinal mucosa, leading to excessive storage of iron (particularly in the liver, skin, pancreas, heart, joints and testes) and ultimately resulting in impaired organ structure and function.[1]

INTROL HH Panel I is designed to monitor the detection of H63D and C282Y mutations, genetic risk factors associated with hereditary hemochromatosis. This product is intended to be extracted and analyzed routinely with each HH test run.

INTROL HH Panel I is provided for Research Use Only (RUO). It cannot be cloned, sold, or transferred without the explicit written consent of MMQCI. Patents issued.

INTROL HH Panel I consists of synthetic H63D and C282Y DNA suspended in a non-infectious, blood-like matrix containing carrier DNA, preservatives and stabilizers. The DNA should be extracted and purified from its matrix before analysis.

The Panel is comprised of three bottles, each containing a different genotype. Analysis of INTROL HH Panel I test results can be valuable in the detection and troubleshooting of errors associated with the sample extraction, amplification, and signal measurement phases of HH test systems.

INTROL HH Panel I DNA has been sequenced to validate the presence of mutant or wild type sequence.   The base matrix for the control solution contains synthetic DNA targets, carrier DNA of a non-human species, preservatives and stabilizers.

Unopened INTROL HH Panel I Control material is stable through the expiration date printed on each bottle when stored refrigerated (2° – 8°C). Opened material tightly capped and returned to the refrigerator (2° – 8°C) shortly after use is stable for thirty (30) days from the date of opening.

Upon receipt and after opening, the material should be stored at 2° - 8°C. Do not

Extract and analyze INTROL HH Panel I as you would a whole blood specimen:

Note 2: The level of DNA present in the extracted control may not be detectable by certain quantitation methods and is not quantifiable by spectrophotometer measurements.

The laboratory should follow Good Laboratory Practice (GLP) and establish its own performance characteristics for INTROL HH Panel I in demonstrating adequate system performance. Recoveries may vary depending on extraction method, instrumentation, cycle time / temperature, reagents, method variation, and other systematic or random errors.