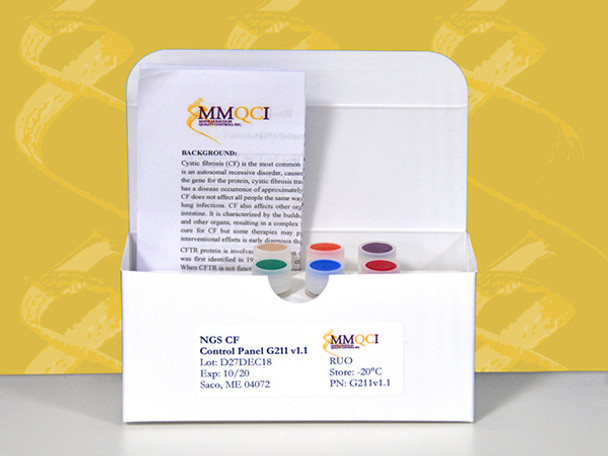 Cystic fibrosis (CF) is the most common inherited disease in the United States today. CF is an autosomal recessive disorder, caused by the presence of mutations in both copies of the gene for the protein, cystic fibrosis transmembrane conductance regulator (CFTR). CF has a disease occurrence of approximately one out of 2,000 – 4,000 live births1. Although CF does not affect all people the same way, it is generally recognized as causing persistent lung infections. CF also affects other organs, including the pancreas, liver, kidneys and intestine. It is characterized by the buildup of thick, sticky mucus in the lungs, pancreas and other organs, resulting in a complex multi-organ, multisystem disease1. There is no cure for CF but some therapies may prolong life, therefore, a key focus of current interventional efforts is early diagnosis through newborn screening2.

CFTR protein is involved in production of sweat, digestive fluids and mucus. The gene was first identified in 1989 on human chromosome 7 and contains 27 coding exons3,4. When CFTR is not functional, these secretions which are usually thin and watery instead become thick and mucus-like and ultimately lead to nutritional decline and progression of lung disease associated with morbidity and mortality1. Over 2,000 variants have been reported in the CFTR coding and flanking sequence, in all ethnic and racial populations at various frequencies. However, less than 10% of these reported variants have been interpreted to be clinically-relevant variants. The 188 CFTR variants listed in Table 1 are contained in the 6 tubes of NGS CF Control Panel G211 v1.1. The 143 asterisked (*) variants have been identified as CF-causing by The Clinical and Functional Translation of CFTR (CFTR2) international project and are listed in the CFTR2 database at http://cftr2.org (August 13, 2015 version)5,6. Included in Table 1 are the 23 mutations recommended in 2004 by the American College of Medical Genetic (ACMG) and in 2011 by the American College of Obstetricians and Gynecologists (ACOG)7,8,9. These mutations have been bolded and asterisked in Table 1. Legacy nomenclature is used throughout this Package Insert.

The NGS CF Control Panel G211 v1.1 is intended for in vitro use as a quality control to monitor the analytical performance of library preparation, sequencing and data analysis associated with Next Generation Sequencing for identifying variants within the CFTR gene. Additionally, because the NGS CF Control Panel G211 v1.1 carries multiple insertions, deletions and homopolymers of varying lengths and composition, this control panel can also serve as a method control to monitor the ability of any NGS test system to correctly identify these types of variants. Appropriate primers are required to amplify the areas of interest.

NGS CF Control Panel G211 v1.1 is provided for Research Use Only (RUO). It cannot be cloned, sold, or transferred without the explicit written consent of MMQCI.

NGS CF Control Panel G211 v1.1 is designed as a multiplex reference material to monitor the simultaneous detection of the CFTR mutations and variants associated with cystic fibrosis listed in Table 1, including the 23 mutations recommended by ACMG and ACOG. The NGS CF Control Panel G211 v1.1 product is intended to be analyzed routinely with each cystic fibrosis test run and provide a quality control for all aspects of library preparation, sequencing, and data analysis.

Controls should be tested routinely as a matter of Good Laboratory Practice and according to guidelines or requirements of local, state, and/or federal regulations or accrediting organizations. Best practice is to establish a quality control program for every assay performed by the laboratory. Routine use of quality controls that are consistent lot to lot assists the laboratory in identifying shifts, trends, and increased frequency of random errors caused by variations in the test system. Early investigation can prevent failed assay runs.

NGS CF Control Panel G211 v1.1 consists of synthetic CFTR DNA suspended in a non- infectious buffer with stabilizers. The synthetic DNA is composed of all 27 CFTR gene exons plus intronic borders, and contains CF associated mutations and variants divided among 6 tubes (G211Av1.1, G211Bv1.1, G211Cv1.1, G211Dv1.1, G211Ev1.1 and G211Fv1.1). The mutations and variants present in NGS CF Control Panel G211 v1.1 are described in Table 1. This control panel is provided as a non-extractable control with copy numbers of target sequence that are similar to that of extracted human whole blood samples.

Controls are ready to use; no extraction is needed.

Note: NGS CF Control Panel G211 v1.1 cannot be quantified or measured by standard methods such as spectrophotometry (A260nm/A280nm) because synthetic DNA has significantly less mass than genomic DNA. However, the controls are manufactured to have approximately equivalent copy numbers of the target gene as genomic DNA. Please contact MMQCI if guidance on volume to add to assay is desired.

Upon receipt and after opening, the material should be stored at < -20°C. Unopened NGS CF Control Panel G211 v1.1 is stable through the expiration date printed on each tube when stored frozen (< -20°C). Opened material should be tightly capped and returned to the freezer (< -20°C) immediately after use. The material is stable for five freeze/thaw cycles.