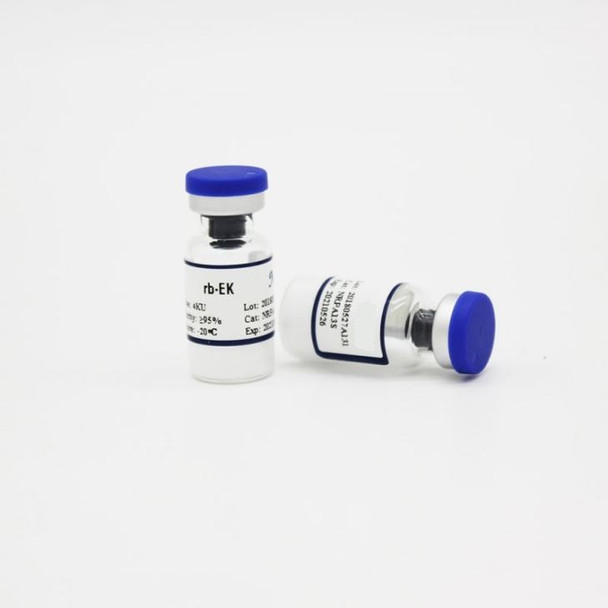 Enterokinase (EC 3.4.21.9) is a serine proteolytic enzyme, which can recognize the sequence of ASP ASP Lys (ddddk) in the protein efficiently and specifically, hydrolyze the peptide bond at the C-terminal of lysine (Lys , K), produce cleavage, hydrolyze trypsinogen to trypsin in the organism. Because enterokinase has high specificity and efficient enzymatic cleavage, it is widely used in genetic engineering. Product development.

Natural enterokinase consists of a heavy chain of 115 kda and a light chain of 35 kDa. The heavy chain anchors the cell membrane and the light chain has full enzymatic catalytic activity. The central region of light chain activity (235A. A., 26.2kda) secreted and expressed by E. coli is more active than that of bovine enterokinase, which is particularly suitable for enzymatic digestion of the protein. of genetic engineering fusion.

(2) Phosphate can inhibit enterokinase activity, so phosphate buffer should not be used as an enzymatic cutting system.

Spoligotyping Kit with Primers and Controls

MSRP:
Now: €1,455.00
Was:
Spoligotyping Kit with Primers and Controls | IM9701 | Gentaur Genprice Spoligotyping is an effective method for fast detection and categorization of Mycobacterium tuberculosis complex based on...

Spike protein of the mutant strain B.1.1.7 Mutation, also commonly known as the “UK Variant”. It is a full-length protein, which is active in its native trimeric form, that is stabilized...

Spike protein of the mutant strain w B.1.351 RBD, also commonly known as the “South African Variant”. It is a full-length protein, which is active in its native trimeric form, that is...

MSRP:
Now: €452.00 - €1,273.00
Was:
Human growth hormone (hGH) is a 191 amino acid non-glycosylated protein hormone secreted by the anterior pituitary gland in the brain. It is one of the most important postpartum hormones. HGH plays...

MSRP:
Now: €188.00 - €1,332.00
Was:
Basic fibroblast growth factor (bFGF), also known as FGF-2, is a heparin binding member of the FGF molecule superfamily. It plays an important role in cell proliferation and differentiation...

MSRP:
Now: €141.00 - €2,565.00
Was:
Streptavidin is a homotetrameric protein found in the culture broth of Streptomyces avidinii. Similar to avidin, one mole of streptavidin can bind to 4 moles of biotin with high affinity virtually...