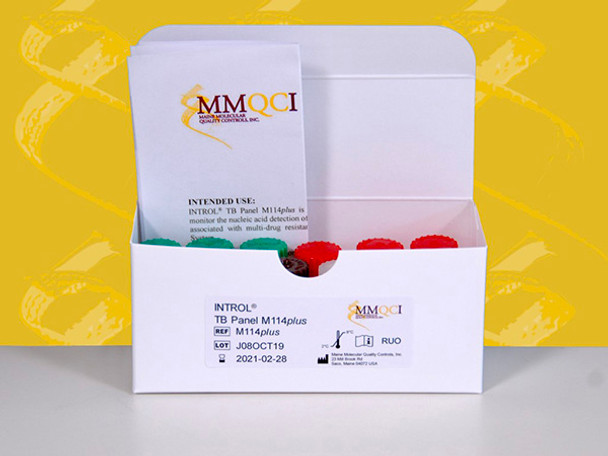 INTROL® TB Panel M114plus is intended for use as a quality control to monitor the nucleic acid detection of M. tuberculosis (MTB) and the mutations associated with multi-drug resistant MTB (MDR-TB) on the GeneXpert® System.

The World Health Organization (WHO) reports that about 1.7 billion people, 23% of the world’s population, are estimated to have a latent TB infection, and are thus at risk of developing active TB disease during their lifetime.1 There has been major progress in subsequent years – more than 60 million people have been documented as treated and cured since 2000, and case and death rates have fallen steadily. Nevertheless, worldwide, around 10 million people still fall ill with the disease each year (more adults than children, and more men than women), and TB is one of the top 10 causes of death. It is also the leading cause of death from a single infectious agent, ranking above HIV/AIDS. 2

INTROL® TB Panel M114plus is provided for Research Use Only (RUO). It cannot be cloned, sold, or transferred without the explicit written consent of MMQCI.

Best practice is to establish a quality control program for every assay performed by the laboratory.3, 4 Routine use of quality controls that are consistent lot to lot and monitor the entire assay assists the laboratory in identifying shifts, trends, and increased frequency of random errors caused by variations in the test system, such as failing reagents and pipetting errors. Early investigation can prevent failed assay runs.

*References citing the mutations can be found at www.tbdreamdb.com

INTROL® TB Panel M114plus has been tested on the GeneXpert® System only. It cannot be cloned, sold, or transferred without the explicit written consent of MMQCI. This product does not contain any biological material of human origin or infectious microorganisms. Do not freeze.

Unopened controls are stable through the expiration date printed on each bottle when stored at 2° – 8°C. Opened material tightly capped and returned to the refrigerator (2° – 8°C) shortly after use is stable for thirty (30) days from the date of opening.

INSTRUCTIONS FOR USE ON THE GeneXpert® System: