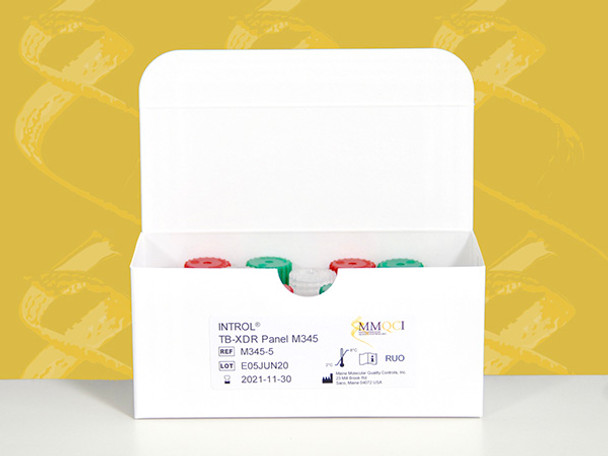 The INTROL TB-XDR Panel M345 is intended for use as an external quality control to monitor analytical performance of the extraction, amplification and detection steps of in vitro laboratory nucleic acid testing procedures for the qualitative detection of extensively drug resistant (XDR) Mycobacterium tuberculosis (MTB) complex by the Xpert® MTB/XDR Assay on Cepheid GeneXpert Instrument Systems. The INTROL TB-XDR Panel M345 drug resistance associated mutations are listed in Table 2.

The World Health Organization (WHO) reports that about 1.7 billion people, 23% of the world’s population, are estimated to have a latent TB infection, and are thus at risk of developing active TB disease during their lifetime.1 Although death rates have fallen steadily since 2000, nevertheless, worldwide, around 7- 10 million people still fall ill with the disease each year and half a million new cases of rifampicin-resistant TB were reported in 2018, of which 78% had multi-drug resistant TB (MDR-TB).1 Highly resistant strains of MDR-TB, which acquired additional resistance to fluoroquinolones and at least one of three injectable second-line drugs (i.e., amikacin, kanamycin, or capreomycin) are termed extensively drug resistant TB (XDR-TB) and are very difficult to treat. Due to resistance to the most potent TB drugs, patients are left with treatment options that are much less effective and early diagnosis becomes crucial.2

INTROL TB-XDR Panel M345 consists of non-infectious, synthetic MTB DNA encapsulated in chemically fixed and killed bacterial cells. The MTB DNA is comprised of the following MTB gene segments: eis promoter, fabG1, gyrA, gyrB, inhA promoter, katG, oxyR-ahpC, and rrs. Drug resistance mutations are incorporated into each of these segments as indicated in Table 2. The controls must undergo a stringent extraction process in order to effectively release the MTB DNA from the cells. INTROL TB-XDR Panel M345 is compatible with the Xpert® MTB/XDR Assay (Cepheid). It does not include the entire MTB genome. Consult with MMQCI for compatibility with other test methods.

Best practice is to establish a quality control program for every assay performed by the laboratory. Routine use of quality controls that are consistent lot to lot and monitor the entire assay assists the laboratory in identifying shifts, trends, and increased frequency of random errors caused by variations in the test system, such as failing reagents and pipetting errors. Early investigation can prevent failed assay runs.

contain encapsulated MTB DNA. INTROL TB-XDR NEG contains buffer and preservative only. The cells encapsulating the MTB DNA are suspended in buffer with preservative. The presence or absence of drug resistance mutations is specified for each control in Table 1 and Table 2.

Expected results and list of drug resistance mutations when controls are analyzed with the Xpert MTB/XDR Assay on GeneXpert Systems are listed in Tables 1 and 2.

*References citing the mutations can be found at www.tbdreamdb.com. REFERENCES: