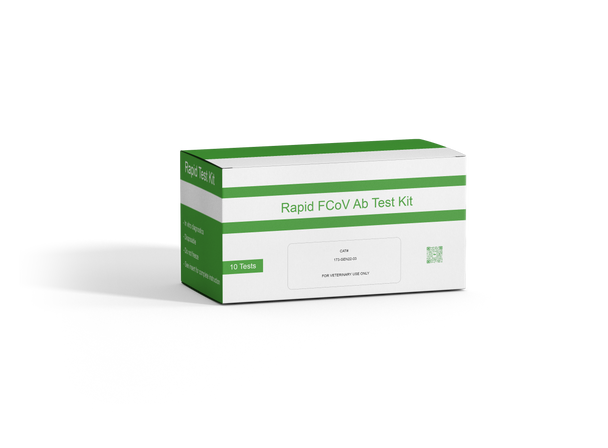 The Anigen Rapid FCoV Ab Test Kit is a chromatographic immunoassay for the qualitative detection of Feline Corona virus(FCoV) antibodies in feline whole blood, serum or plasma.
The Anigen Rapid FCoV Ab Test Kit has two letters which are test(T) line and control(C) line on the surface of device. The control line is a reference line which provides the test is performing properly. The control line has to appear every time when the test has performed. If the antibodies against FCoV are present in sample, a purple test line would appear in the result window.
The highly selective recombinant FCoV antigens are used as a capture and detector in the assay. These antigens are capable of detecting FCoV antibodies in feline samples with high accuracy.

MSRP:
Now: £233.00
Was:
The FCoV Ag Rapid Test Kit is a chromatographic immunoassay for the qualitative detection of Feline Corona virus antigen in feline feces.The FCoV Ag Test Kit has a letter of “T” and “C” as test line...
173-RG12-05

MSRP:
Now: £84.00
Was:
The Anigen Rapid FIV Ab test is a rapid test based on the principle of immunochromatography for the qualitative screening of the feline IMMUNODEFICIENCY virus (FIV) antibody (Ab) gp 40 in whole...
173-RB22-01